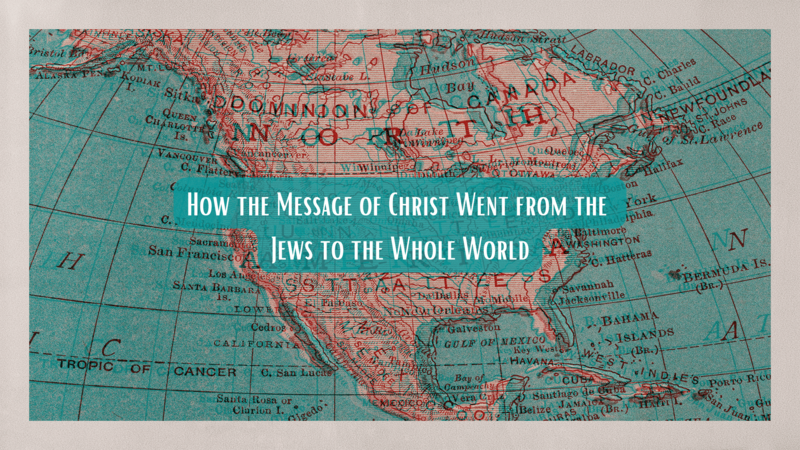 WHAT HAPPENED?
How the Message of Christ Went from the Jews to the whole World
Various Passages in Luke/Acts
Intro:

Q: Where does Luke begin?

Luke 1:5 There was in the days of Herod, the king of Judea, a certain priest named Zacharias, of the division of Abijah. His wife was of the daughters of Aaron, and her name was Elizabeth.
Luke 1:6 And they were both righteous before God, walking in all the commandments and ordinances of the Lord blameless.
Luke 1:7 But they had no child, because Elizabeth was barren, and they were both well advanced in years.

Luke 1:8 So it was, that while he was serving as priest before God in the order of his division,
Luke 1:9 according to the custom of the priesthood, his lot fell to burn incense when he went into the temple of the Lord.
Luke 1:10 And the whole multitude of the people was praying outside at the hour of incense.

Luke 1:11 Then an angel of the Lord appeared to him, standing on the right side of the altar of incense.
Luke 1:12 And when Zacharias saw him, he was troubled, and fear fell upon him.
Luke 1:13 But the angel said to him, “Do not be afraid, Zacharias, for your prayer is heard; and your wife Elizabeth will bear you a son, and you shall call his name John.
Luke 1:14 And you will have joy and gladness, and many will rejoice at his birth.

Luke 1:15 For he will be great in the sight of the Lord, and shall drink neither wine nor strong drink. He will also be filled with the Holy Spirit, even from his mother’s womb.
Luke 1:16 And he will turn many of the children of Israel to the Lord their God.
Luke 1:17 He will also go before Him in the spirit and power of Elijah, ‘to turn the hearts of the fathers to the children,’ and the disobedient to the wisdom of the just, to make ready a people prepared for the Lord.”

A: In Jerusalem…as Jewish as possible.

Acts 28:28 “Therefore let it be known to you that the salvation of God has been sent to the Gentiles, and they will hear it!”

A: In Rome…as Gentile as possible.

Q: What happened in between to go from one extreme to another?

Acts 15:1 And certain men came down from Judea and taught the brethren, “Unless you are circumcised according to the custom of Moses, you cannot be saved.”
Acts 15:2 Therefore, when Paul and Barnabas had no small dissension and dispute with them, they determined that Paul and Barnabas and certain others of them should go up to Jerusalem, to the apostles and elders, about this question.

Acts 15:28 For it seemed good to the Holy Spirit, and to us, to lay upon you no greater burden than these necessary things:
Acts 15:29 that you abstain from things offered to idols, from blood, from things strangled, and from sexual immorality. If you keep yourselves from these, you will do well.

A: The public preaching in the book of Acts provides the answer.

SURVEY OF THE PUBLIC PREACHING IN THE BOOK OF ACTS

preacher    sermon    proper response    reaction
(1)    Peter    Acts 2:22-24, 36
…you have taken by lawless hands, have crucified, and put to death; whom God raised up, having loosed the pains of death, because it was not possible that He should be held by it.     2:38
Then Peter said to them, “Repent, and let every one of you be baptized in the name of Jesus Christ for the remission of sins; and you shall receive the gift of the Holy Spirit.     2:37, 41
Now when they heard this, they were cut to the heart, and said to Peter and the rest of the apostles, “Men and brethren, what shall we do?”

(2)    Peter    Acts 3:13-15
But you denied the Holy One and the Just, and asked for a murderer to be granted to you, and killed the Prince of life, whom God raised from the dead, of which we are witnesses.
3:19
Repent therefore and be converted, that your sins may be blotted out, so that times of refreshing may come from the presence of the Lord    4:1-3
being greatly disturbed that they taught the people and preached in Jesus the resurrection from the dead.
And they laid hands on them, and put them in custody until the next day, for it was already evening.  However, many of those who heard the word believed
(3)    Peter    Acts 4:8-10
let it be known to you all, and to all the people of Israel, that by the name of Jesus Christ of Nazareth, whom you crucified, whom God raised from the dead, by Him this man stands here before you whole.

4:12
Nor is there salvation in any other, for there is no other name under heaven given among men by which we must be saved.
4:14-18, 21
But so that it spreads no further among the people, let us severely threaten them, that from now on they speak to no man in this name.

So when they had further threatened them, they let them go, finding no way of punishing them, because of the people, since they all glorified God for what had been done.
(4)    Peter/other apostles    Acts 5:29-32
The God of our fathers raised up Jesus whom you murdered by hanging on a tree. Him God has exalted to His right hand to be Prince and Savior, to give repentance to Israel and forgiveness of sins. And we are His witnesses to these things    5:42
And daily in the temple, and in every house, they did not cease teaching and preaching Jesus as the Christ    5:33, 40
When they heard this, they were furious and plotted to kill them.

And they agreed with him, and when they had called for the apostles and beaten them, they commanded that they should not speak in the name of Jesus, and let them go.
(5)    Stephen    Acts 7:51-53, 55-56
Which of the prophets did your fathers not persecute? And they killed those who foretold the coming of the Just One, of whom you now have become the betrayers and murderers, who have received the law by the direction of angels and have not kept it.

and said, “Look! I see the heavens opened and the Son of Man standing at the right hand of God!”    7:59-60
And they stoned Stephen as he was calling on God and saying, “Lord Jesus, receive my spirit.” Then he knelt down and cried out with a loud voice, “Lord, do not charge them with this sin.” And when he had said this, he fell asleep.    7:54, 57-58
When they heard these things they were cut to the heart, and they gnashed at him with their teeth.

Then they cried out with a loud voice, stopped their ears, and ran at him with one accord; and they cast him out of the city and stoned him.
(6)    Peter    Acts 10:36-41
And we are witnesses of all things which He did both in the land of the Jews and in Jerusalem, whom they killed by hanging on a tree. Him God raised up on the third day, and showed Him openly, not to all the people, but to witnesses chosen before by God
10:48
And he commanded them to be baptized in the name of the Lord.
10:44-47
While Peter was still speaking these words, the Holy Spirit fell upon all those who heard the word.
And those of the circumcision who believed were astonished, as many as came with Peter, because the gift of the Holy Spirit had been poured out on the Gentiles also.
(7)    Paul     Acts 13:27-33
And though they found no cause for death in Him, they asked Pilate that He should be put to death. Now when they had fulfilled all that was written concerning Him, they took Him down from the tree and laid Him in a tomb. But God raised Him from the dead.    13:38-39
Therefore let it be known to you, brethren, that through this Man is preached to you the forgiveness of sins; and by Him everyone who believes is justified from all things from which you could not be justified by the law of Moses    13:42-45
So when the Jews went out of the synagogue, the Gentiles begged that these words might be preached to them the next Sabbath.

On the next Sabbath almost the whole city came together to hear the word of God. But when the Jews saw the multitudes, they were filled with envy; and contradicting and blaspheming, they opposed the things spoken by Paul.
(8)    Paul    Acts 17:2-3
Then Paul, as his custom was, went in to them, and for three Sabbaths reasoned with them from the Scriptures, explaining and demonstrating that the Christ had to suffer and rise again from the dead, and saying, “This Jesus whom I preach to you is the Christ.”
17:4-5
And some of them were persuaded; and a great multitude of the devout Greeks, and not a few of the leading women, joined Paul and Silas. But the Jews who were not persuaded, becoming envious, took some of the evil men from the marketplace, and gathering a mob, set all the city in an uproar and attacked the house of Jason, and sought to bring them out to the people.
(9)    Paul    Acts 17:18
Then certain Epicurean and Stoic philosophers encountered him. And some said, “What does this babbler want to say?”
Others said, “He seems to be a proclaimer of foreign gods,” because he preached to them Jesus and the resurrection.    17:30-31
Truly, these times of ignorance God overlooked, but now commands all men everywhere to repent,  because He has appointed a day on which He will judge the world in righteousness by the Man whom He has ordained. He has given assurance of this to all by raising Him from the dead.”    17:19-21, 32
And they took him and brought him to the Areopagus, saying, “May we know what this new doctrine is of which you speak? For you are bringing some strange things to our ears. Therefore we want to know what these things mean.”

And when they heard of the resurrection of the dead, some mocked, while others said, “We will hear you again on this matter.”
(10)    Paul    Acts 26:22-23
Therefore, having obtained help from God, to this day I stand, witnessing both to small and great, saying no other things than those which the prophets and Moses said would come— that the Christ would suffer, that He would be the first to rise from the dead, and would proclaim light to the Jewish people and to the Gentiles.”    26:27
King Agrippa, do you believe the prophets? I know that you do believe.”    26:24, 28
Now as he thus made his defense, Festus said with a loud voice, “Paul, you are beside yourself! Much learning is driving you mad!”

Then Agrippa said to Paul, “You almost persuade me to become a Christian.”