The Days and Nights of His Passion, vol 1.

THE HAND OF MY BETRAYER IS WITH ME ON THE TABLE

Intro: Two uncomfortable moments are recorded in this text. On the night before He died, the Lord Jesus says many things to His disciples that will guide them through the next few weeks/months. He is basically speaking to them as a dying man, downloading the most valuable truths they could ever receive. In the middle of His genuine discourse, a traitor shares the same supper dish with Him, and the other apostles begin arguing over who will become the sheriff when He’s gone. What Christ says about these two awkward instances is highly instructive for our lives today.

Luke 22:21 But behold, the hand of My betrayer is with Me on the table.

Luke 22:22 And truly the Son of Man goes as it has been determined, but woe to that man by whom He is betrayed!”

The warm environment of the Passover meal is immediately chilled by the serious note that a betrayal is looming.

Judas’ hand is next to Jesus’ on the table as they finish the Passover meal. Typically, the betraying back-stabbing or throat-slitting hand is hidden from view – behind the assailant’s back. It is out in the open in this instance – visible and trusted.

“as it has been determined” = God is sovereign over the matter; “woe to that man” = Judas is responsible for his part.

Acts 2:23 Him, being delivered by the determined purpose and foreknowledge of God, you have taken by lawless hands, have crucified, and put to death.

Phil 2:12 Therefore, my beloved, as you have always obeyed, not as in my presence only, but now much more in my absence, work out your own salvation with fear and trembling;

Phil 2:13 for it is God who works in you both to will and to do for His good pleasure.

Neither Jesus nor Judas is an instrument of blind fate. In this story, there is no “as luck would have it” moment.

In the anguish of the Garden of Gethsemane, Jesus had a real choice whether to proceed or bail from going to the Cross (“let this cup pass from me”). Likewise, at the Last Supper, Judas had a real choice to abandon his plan to betray Christ but rejected it.

In these two men, one serving Satan and one serving God, His mystifying sovereignty accomplishes a singular purpose – redemption!

God is still holy. And God is still God. And, like Judas, God will hold you fully responsible for the direction you choose in life.

Luke 22:23 Then they began to question among themselves, which of them it was who would do this thing.

WHAT KIND OF MAN WOULD DO SUCH A THING?

Apparently, Judas was a skilled actor, and played the role of a disciple quite convincingly.

[photo: painting of the Last Supper]

Artistic renderings of the Last Supper often paint Judas as malevolent in appearance – he nearly always “looks” like a villain.

The fact that none of the disciples seems to have suspected Judas dispels this stereotype. He did not look a scoundrel. They even trusted him with the money!

The betraying hand of Judas at the table with Christ is significant and tragic at the same time. The table is a place of close friendship.

Whoever you eat with you accept and receive. Eating together meant no animosity.

How many of us have experienced the betraying hand in trusted relationships? Have you been betrayed in a marriage? Or by parents/siblings/children? Closest friends? Teachers or students?

Those who have know to some extent the sense of loss Jesus felt when Judas betrayed Him. And, in a consoling sense, they know that Jesus has experienced what they are going through.

Luke 22:24 Now there was also a dispute among them, as to which of them should be considered the greatest.

Christ has just spoken to them about regularly having a meal in His memory, since He is going to die for them. Yet, they are worried about their own reputations, about how they will be remembered.

With Jesus so close to the cross, how could His closest followers be so far from Him in spirit?

If Jesus is our general, which one of us gets to be Colonel? Wouldn’t we love to know whose names were submitted during their argument? But the Scripture does not indulge our fancies any more than Jesus indulged theirs.

There is perhaps no subject on which the Scripture is less tolerant than self-promotion.

Jesus interrupts their vanity with a warning.

Luke 22:25 And He said to them, “The kings of the Gentiles exercise lordship over them, and those who exercise authority over them are called ‘benefactors.’

“benefactors” – one of the most common terms a ruler in the Greco-Roman would call himself. It means something like “good-doer” or “best worker” or “one whose deeds make him trustworthy." (Alexander the Great, Ben the Benefactor)

In fact, so good and successful is he, that others benefit from his philanthropy. His resources now bless the public.

The point Luke is making is obvious enough: People of the world (Gentiles) like to get the credit for what they have done.

Who is the true benefactor? The Lord Jesus.

Acts 10:38 how God anointed Jesus of Nazareth with the Holy Spirit and with power, who went about doing good and healing all who were oppressed by the devil, for God was with Him.

This posture of prominence induces a sharp rebuke from the Lord Jesus.

Luke 22:26 But not so among you; on the contrary, he who is greatest among you, let him be as the younger, and he who governs as he who serves.

The criteria for greatness are radically reversed in the kingdom of God.

In the ancient world it was accepted that with age came privileges. Therefore, youngest was, by definition, the lowliest.

Instead of demanding public honor, the greatest is to live as though he held only the status of the youngest member of the group.

In the same spirit the leader must be like one who serves, not making his power known or felt, even though people naturally esteem the diner as higher than the waiter.

“Who, after all, is great?” or “What is greatness really?”

WHAT KIND OF MAN SHOULD I BECOME?

From the world’s perspective, the answer seems obvious: “honored guests at banquets are great…certainly greater than those who serve them their meal.”

But the kingdom of God is much different. Jesus declares: “I am among you as the One who serves.”

illus: A missionary in Papua, New Guinea made a powerful statement of this principle when he translated the NT into the language of the Itamul tribesmen. In Itamul culture the most important person sits in the middle of the canoe, the second most important person sits in the bow (front), and the least important paddles at the stern (back). Here is how the translation went: “If a person wishes to be a leader, he should not sit in the middle of the canoe. Let him sit at the stern. Let him do everyone’s work.”

Is Jesus saying that if His followers wish to rise to great heights in the church, they must first prove themselves in lowly places? No.

He is insisting that faithfully serving in a lowly place is itself true greatness already!

Luke 22:28 “But you are those who have continued with Me in My trials.

Their solidarity with Jesus had caused them to endure with Him through much difficulty.

Where in Scripture is the cost of discipleship defined any better than this verse?

He serves in their midst; they remain with Him in His trials.

From this we learn that following Jesus will not always feel like all benefits and blessings.

But no one has to “endure” good things. It is the bad things call for our perseverance. No one quits when everything is going well.

Shallow faith, like seed sown on rocky soil, receives the gospel gladly but forsakes it in times of hardship.

Luke 8:13 But the ones on the rock are those who, when they hear, receive the word with joy; and these have no root, who believe for a while and in time of temptation fall away.

Those who receive the gospel solely for its benefits will abandon it for its costs.

Discipleship is more than enduring trials, however. Its ultimate purpose, according to vv.29-30, is to participate in the mission of Christ and to share in His rule.

Luke 22:29 And I bestow upon you a kingdom, just as My Father bestowed one upon Me,

Luke 22:30 that you may eat and drink at My table in My kingdom, and sit on thrones judging the twelve tribes of Israel.”

Jesus describes the end-time future as a never-ending banquet at the table with Him. It is God who grants seats at the messianic banquet and honored places of leadership in the kingdom.

Fellowship with Jesus will be more than celebrating in an eschatological winner’s circle. Christ promised His disciples they would have important business to tend to in the next world. They would “sit on throne judging the twelve tribes of Israel.”

“Sitting on thrones” does not point to a holiday but a workday, ruling with Jesus Christ, the Lord of glory.

We have a rulership coming. We will not be relegated to insignificant roles in the kingdom. We will have satisfying work to do on behalf of our King – much like Adam was commissioned to keep and cultivate the garden of Eden (Gen 2:15).

2 Tim 2:11 This is a faithful saying: For if we died with Him, we shall also live with Him.

Rev 3:21 To him who overcomes I will grant to sit with Me on My throne, as I also overcame and sat down with My Father on His throne.

The ultimate goal of the redemptive work of Jesus Christ is not simply to save sinners, but also to transform them to become servants of the Lord who rule for Him and with Him.

What are we to make of Judas’ hand being close to Jesus’ at the Last Supper? Betraying Christ is most often a threat among those who seem close to Him.

How are we to understand the disciples disputing about greatness in the kingdom while seated at the Lord’s table? This very ugly moment in the narrative is a real and present caution to all of us who share the same table – personal ambition has no place in the church. 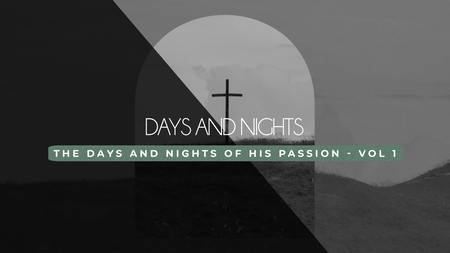 The Days and Nights of His Passion

But I Have Prayed For You

The Hand of My Betrayer is With Me

Do This in Remembrance of Me

GO AND PREPARE THE PASSOVER FOR US