GOOD NEWS IS WORTH REPEATING
Genesis 1-9 various
Intro: The book of Genesis is probably the most important book ever written. No work that is known to us from the Ancient Near East is remotely comparable in scope, to say nothing of less measurable qualities.

The Bible is considered (even by those who don’t believe in its inspiration) as the book that has exerted the greatest influence on history of any book ever produced, and Genesis is the foundation of all of 66 books of the canon.

If the Bible were somehow expunged of the Book of Genesis (as many today would prefer), the rest of the Bible would be incomprehensible. It would be like a building without a ground floor, or a bridge with no support.

Without Genesis, the Scriptures would collapse.

Chapters 1-11 describe 2 opposite progressions: first, God’s orderly creation, to its climax in man as a responsible and blessed being, and then the disintegrating work of sin, to its first great anticlimax in the corrupt world of the Flood, and its second in the folly of Babel.

What you believe about your origin will inevitably determine your belief about your purpose and destiny.

The New Testament is even more dependent on Genesis than the Old Testament!

There are at least 165 passages in Genesis that are either directly quoted or clearly referred to in the NT. Many of these are alluded to more than once, so that there are at least 200 quotations or allusions to Genesis in the NT.

It is significant that the portion of Genesis which has been the object of the greatest attacks of skepticism and unbelief, the first 11 chapters, is the portion which had the greatest influence on the NT.

On at least 6 different occasions, Jesus Christ Himself quoted from or referred to something or someone in one of these chapters (1-11), including specific reference to each of the first 7 chapters.

In not one of these many instances where the OT or NT refers to Genesis is there the slightest evidence that the writers regarded the events or persons as mere myths or allegories. To the contrary, they viewed Genesis as absolutely historical, categorically true and undeniably authoritative.

It is therefore impossible for one to reject the historicity and divine authority of Genesis without undermining, and in effect, repudiating the authority of the entire Bible.

If the first Adam is only an allegory, then by all logic, so is the second Adam.

The initial creation was not perfect in the sense that it was complete, but it was perfect for that first stage of God’s six-day plan of creation.

Matthew Henry – The Creator could have made His work perfect at first, but by His gradual proceeding he would show what is, ordinarily, the method of His providence and grace.

God’s normal method is to work from the formless to the formed. The six days must be viewed as the positive counterpart of the twin negatives, “formless and void,” matching them with form and fullness.

Gen 1:2b …And the Spirit of God was hovering over the face of the waters.

Gen 8:1 Then God remembered Noah, and every living thing, and all the animals that were with him in the ark. And God made a wind to pass over the earth, and the waters subsided.

Gen 1:28 Then God blessed them, and God said to them, “Be fruitful and multiply; fill the earth and subdue it; have dominion over the fish of the sea, over the birds of the air, and over every living thing that moves on the earth.”

Gen 9:1 So God blessed Noah and his sons, and said to them: “Be fruitful and multiply, and fill the earth.”

Gen 1:29 And God said, “See, I have given you every herb that yields seed which is on the face of all the earth, and every tree whose fruit yields seed; to you it shall be for food.”

Gen 9:3 Every moving thing that lives shall be food for you. I have given you all things, even as the green herbs.

Breath of life/judgment of death

Gen 2:7 And the Lord God formed man of the dust of the ground, and breathed into his nostrils the breath of life; and man became a living being.

Gen 7:21 And all flesh died that moved on the earth: birds and cattle and beasts and every creeping thing that creeps on the earth, and every man.
Gen 7:22 All in whose nostrils was the breath of the spirit of life, all that was on the dry land, died.

Gen 8:4 Then the ark rested in the seventh month, the seventeenth day of the month, on the mountains of Ararat.

Gen 2:15 Then the Lord God took the man and put him in the garden of Eden to tend and keep it.

Gen 2:15 Then the Lord God took the man and put him in the garden of Eden to tend and keep it.

Gen 9:20 And Noah began to be a farmer, and he planted a vineyard.

Gen 3:6 So when the woman saw that the tree was good for food, that it was pleasant to the eyes, and a tree desirable to make one wise, she took of its fruit and ate. She also gave to her husband with her, and he ate.

Gen 9:21 Then he drank of the wine and was drunk, and became uncovered in his tent.

Gen 3:7 Then the eyes of both of them were opened, and they knew that they were naked; and they sewed fig leaves together and made themselves coverings.

Gen 9:21 Then he drank of the wine and was drunk, and became uncovered in his tent.

Gen 3:7 Then the eyes of both of them were opened, and they knew that they were naked; and they sewed fig leaves together and made themselves coverings.

Gen 9:23 But Shem and Japheth took a garment, laid it on both their shoulders, and went backward and covered the nakedness of their father. Their faces were turned away, and they did not see their father's nakedness.

announcement of a curse

Gen 3:14 So the Lord God said to the serpent: “Because you have done this, you are cursed more than all cattle, and more than every beast of the field; on your belly you shall go, and you shall eat dust all the days of your life.”

Gen 3:17 Then to Adam He said, “Because you have heeded the voice of your wife, and have eaten from the tree of which I commanded you, saying, ‘You shall not eat of it’: “Cursed is the ground for your sake; in toil you shall eat of it all the days of your life.”

Gen 9:25 Then he said: “Cursed be Canaan; a servant of servants he shall be to his brethren.”

1 Corinthians 15:22 For as in Adam all die, even so in Christ all shall be made alive.

WHY DOES GOD REPEAT HIMSELF THROUGHOUT SCRIPTURE?

(a)    to emphasize what is most important 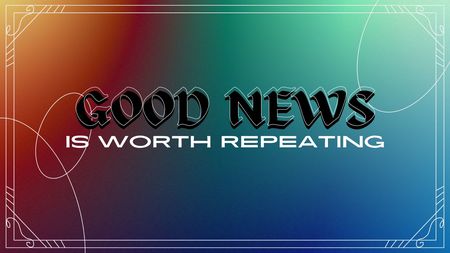 GOOD NEWS IS WORTH REPEATING

Good News is Worth Repeating
Genesis 1-9