Jesus Under Surveillance
IS IT LAWFUL FOR US TO PAY TAXES TO CAESAR OR NOT?
Luke 20:20-26
Intro: Someone has said, “If you want to start an argument, talk about religion or politics. But if you want to start a war, then bring your religion into your politics.” Few things are more divisive than an unholy alliance between political power and religious faith. This is as true for Christianity as it is for any other world religion. In America, the close identification between the evangelical church and conservative politics often makes it difficult for nonreligious people to give a fair hearing to the Gospel. Then, when we travel abroad, where the USA is typically regarded as a Christian country, we find that attitudes about the Christian faith are deeply affected by their opinions of U.S. foreign policy – often to the disadvantage of our missionary efforts. I am not advocating for this or that political philosophy. I am simply pointing out that it can be very difficult to get religion and politics right. And when we get them wrong, it causes significant problems for the work of the Gospel. If we want to have a biblical perspective on the true relationship between politics and religion, one of the best places to start is with the most famous verse from today’s text: “Render therefore to Caesar the things that are Caesar's, and to God the things that are God's” (v.25). Remember the context. It was the last week of His life, and the tension was mounting against our Lord. The religious leaders in Jerusalem were trying to destroy Jesus, but they could not find a way because the crowds were hanging on His every word (19:48). In the previous text, Christ told the parable of the Noble Vineyard Owner and His Son which enraged them even more. He was prophesying that the religious leaders would put Him to death and then lose their position of spiritual authority. Since they could not approach Him with bad intentions because of His popularity among the multitudes, they decided to send others to do their dirty work for them.

Luke 20:20 So they watched Him, and sent spies who pretended to be righteous, that they might seize on His words, in order to deliver Him to the power and the authority of the governor.

“Spies” = hypocrites – the problem with hypocrisy is not that it does not tell the truth, but that it tells the truth without sincerity.

Luke 20:21 Then they asked Him, saying, “Teacher, we know that You say and teach rightly, and You do not show personal favoritism, but teach the way of God in truth:

How many of those statements are true about Jesus? ALL OF THEM.

Psalm 55:21 The words of his mouth were smoother than butter, but war was in his heart; His words were softer than oil, yet they were drawn swords.

The Scriptures warn us to be suspicious of the smooth-talking flatterer.

Proverbs 29:5 A man who flatters his neighbor spreads a net for his feet.

This question was designed to catch Jesus in an inescapable dilemma. Perhaps they could discredit Him with a question of public policy. If they could not trap Him in religion, maybe they could ambush Him with politics.

The tribute was the basic Roman tax imposed on every Jewish citizen – the price paid for the privilege of living and working in the Empire.

Like most taxes, this one was highly unpopular. It amounted to a payment that Israelites paid for living on their own land.

Here’s the dilemma: If Jesus told the people to pay the tax, many Jews would consider Him a traitor to the cause of Israel, and He would lose his popularity and influence. On the other hand, if He told the Jews not to pay the tax, He would be guilty of subverting the Empire. Then they would be able to haul Him before the Roman governor and accuse Him of insurrection.

In fact, they tried this exact strategy later when they falsely accused Jesus before Pilate the Roman governor.

Luke 23:2 And they began to accuse Him, saying, “We found this fellow perverting the nation, and forbidding to pay taxes to Caesar, saying that He Himself is Christ, a King.”

If there was one thing the Romans refused to tolerate, it was any kind of rebellion. A man who told people not to pay their taxes would be swiftly arrest and summarily punished.

If He told people to pay their taxes, He was finished as a popular hero; if He told them not to, He was a dead man.

The singular flaw in their reasoning was in asking a question that required either a “yes” or a “no” answer. Either the tax was lawful, or it wasn’t. They were assuming that things could either belong to Caesar or to God, but not both.

“So tell us, Jesus, do our taxes belong to the government, or do they belong to God?”

What would Jesus say?

Luke 20:23 But He perceived their craftiness, and said to them, “Why do you test Me?

“Craftiness” is a word used elsewhere in the NT for the diabolical strategies of the devil.

2 Cor 11:3 But I fear, lest somehow, as the serpent deceived Eve by his craftiness, so your minds may be corrupted from the simplicity that is in Christ.

Jesus warned Satan during the wilderness temptation, “You shall tempt the Lord Your God” (4:12).

Who does Christ now think is behind these questions?

Luke 20:24 Show Me a denarius. Whose image and inscription does it have?” They answered and said, “Caesar's.”

Jesus has done it again, countering a question meant to trap Him with a clever question of His own.

There is such irony that the spies possess the coin that symbolizes what they resent the most: being subject to Rome.

The coin was Caesar’s coin. It bore the emperor’s likeness and slogan.

Their money proved they were part of the Empire, and that Caesar had some claim on them.

Gen 1:27 So God created man in His own image; in the image of God He created him; male and female He created them.

The coin bears Caesar’s image; man bears the image of God. So give the coin to Caesar and give yourself to God.

Jesus is not implying that God and government are two separate and exclusive realms independent of each other.

Instead, He echoes the OT that God is sovereign over all human affairs, including political affairs.

Christ says it is both Church AND State. We are not to neglect one or the other but to render each what is due.

It is as though Jesus declares: “When you render unto Caesar the things which are Caesar’s – and this you must do – you must never forget that the final throne to which you owe loyalty is the Throne of God.”

To receive the practical benefit of what Jesus said, we begin by recognizing that some things do belong to Caesar. When Christ tells us to give the government what it deserves, this assumes that government has legitimate prerogatives.

Even though it is certainly not unlimited, the authority of human government is legitimate.

Rom 13:7 Render therefore to all their due: taxes to whom taxes are due, customs to whom customs, fear to whom fear, honor to whom honor.

J.C. Ryle – So long as we have liberty to worship God in Christ, according to our conscience, and to serve Him in the way of His commandments, we may safely submit to many requirements of the state, which in our own private opinions we do not thoroughly approve.

What shall we render to Caesar? (What belongs to the state?)

Most obvious and immediate application.

People were asking if it was lawful to pay the tribute tax to Caesar. Jesus said it was absolutely required regardless of how wisely or foolishly our tax money will be spent.

Remember that the Roman empire’s occupation was authoritarian and ruthless, and that didn’t mitigate Jesus’ command.

1 Tim 2:1 Therefore I exhort first of all that supplications, prayers, intercessions, and giving of thanks be made for all men,
1 Tim 2:2 for kings and all who are in authority, that we may lead a quiet and peaceable life in all godliness and reverence.

Augsburg Confession – “The Gospel does not introduce any new laws about the civil estate, but commands us to obey the existing laws, whether they were formulated by the heathen or by others, and in this obedience to practice love.” (Article 16)

We are citizens of an earthly government, and from time to time we will be called to serve our fellow citizens. We must take seriously our right to vote by considering it a responsibility and exercising it every time the polls are open.

According to biblical principles, we must choose candidates whose state platforms most closely align with revealed truth.

Military service matters for those to whom God calls. So does jury duty (One day you may be counting on a jury of your peers).

And, yes, believers also should seek to serve the Lord by holding public office. And by doing so you may be holding the fabric of our representative, Constitutional republic together.

The state must stay out of the church, but the church must inform the state.

What shall we render to God? (What belongs to the Lord?)

1 Cor 6:19 Or do you not know that your body is the temple of the Holy Spirit who is in you, whom you have from God, and you are not your own?
1 Cor 6:20 For you were bought at a price; therefore glorify God in your body and in your spirit, which are God's.

Psalm 127:1 Unless the Lord builds the house, they labor in vain who build it

Eph 5:15 See then that you walk circumspectly, not as fools but as wise,
Eph 5:16 redeeming the time, because the days are evil.

Col 3:22 Bondservants, obey in all things your masters according to the flesh, not with eyeservice, as men-pleasers, but in sincerity of heart, fearing God.
Col 3:23 And whatever you do, do it heartily, as to the Lord and not to men,
Col 3:24 knowing that from the Lord you will receive the reward of the inheritance; for you serve the Lord Christ.

Haggai 2:4 ‘The silver is Mine, and the gold is Mine,’ says the Lord of hosts.

Psalm 50:10 For every beast of the forest is Mine, and the cattle on a thousand hills.

Abraham Kuyper – There is a not a square inch in the whole domain of our human existence over which Christ, who is Sovereign over all, does not cry: “Mine!”

If we ask what belongs to God, the answer is everything!

Luke 20:26 But they could not catch Him in His words in the presence of the people. And they marveled at His answer and kept silent. 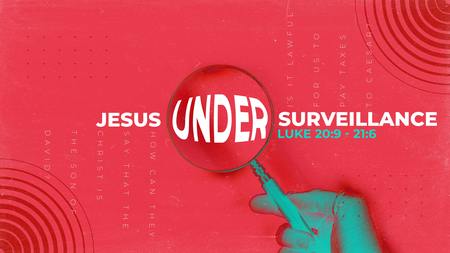 Whose Son is He?

IS IT LAWFUL FOR US TO PAY TAXES TO CAESAR OR NOT?

THE PARABLE OF THE NOBLE VINEYARD OWNER AND HIS SON