Jerusalem’s King Arrives
BY WHAT AUTHORITY ARE YOU DOING THESE THINGS?
Luke 20:1-8
Intro: It was late March 1941, and two Yugoslav representatives are meeting with Hitler in Vienna, Austria. There they sign an agreement submitting their nation to the Nazi’s Third Reich. However, almost as soon as they return to their capital city of Belgrade, their government is overthrown in coup. The new regime offers to sign a simple non-aggression pact with Hitler, but clearly these new Yugoslav leaders had no intention of becoming a puppet state to Nazi Germany. This threw a wrench into Hitler’s plans and sent the German Fuhrer into one of his fiercest rages ever recorded. He would even postpone his planned assault on Soviet Russia for four weeks to crush Yugoslavia with “unmerciful harshness.” And so it was. On April 6 the attack began. For three days and nights German planes ranged over Belgrade at roof-top level. The city had no anti-aircraft guns. The Nazi attack killed 17,000 civilians, wounded many more, and left the city in smoking ruins. The had “offended” Hitler. He was furious. They reaped the whirlwind. This emotional overreaction is similar to what we read about in Luke 20 with the temple leadership.

When Jesus cleared out the moneychangers in Jerusalem’s temple it was an interference in the religious life of the Jewish people. He brought the frenzied enterprise composed of thousands of people spread out over 35 acres to a screeching halt. Who among the ruling class in Israel could accomplish anything close to that? So, it was natural for the Jewish authorities to investigate. They will publicly question Him in such a way as to corner Him into an unfavorable answer. Accosting Jesus before the people was a transparent attempt to depict Him as some kind of outsider, not someone to be trusted or held in high regard. They were very much upset by Jesus’ actions so now they wanted Him to name the person(s) who had put Him up to it. He was a threat to their entire livelihood, so they were determined to destroy Him.

Luke 20:1 Now it happened on one of those days, as He taught the people in the temple and preached the gospel, that the chief priests and the scribes, together with the elders, confronted Him

Jesus has reclaimed the temple for its legitimate use. It was once again the center of God’s revelation. He was busy teaching the people who had come in large numbers to hear Him (v.48). He was preaching the gospel.

Luke 20:2 and spoke to Him, saying, “Tell us, by what authority are You doing these things? Or who is he who gave You this authority?”

They hold a monopoly on regulating the religious affairs of the nation, and they knew no one from their ranks had given this visiting rabbi the right to act like a temple authority figure. This was a “turf” challenge.

In theory, the only person who would be at liberty to interfere in the temple business without their express permission was the Messiah.

And because they refuse to identify Jesus as the Messiah, they thought that by asking this question they would back Him into such a corner that He would be exposed as an unlawful intruder at the temple.

SO, WHO’S IN CHARGE AROUND HERE?

Where did the political leaders get their authority?

Priests – gained their authority courtesy of the Roman governor Pontius Pilate who had direct oversight via the emperor.

Scribes – derived their authority from their ability to read, write, and interpret Scripture.

Elders – this title was assigned to the ones who had seats/voices in the Sanhedrin without belonging to the priesthood or the rabbis. Their age, experience, and long service to the temple ushered them into leadership. Josephus referred to them as “the notables.”

To Jesus: What authority? Who gave it to you?

The Lord had already predicted that Jerusalem’s political infrastructure would discard Him.

Luke 9:22 “The Son of Man must suffer many things, and be rejected by the elders and chief priests and scribes, and be killed, and be raised the third day.”

At the heart of the question about Jesus’ authority is His presumption to speak and act in the place of God.

Once more, Jesus is in the driver’s seat of this situation as He answers His opponents with a counter-question – a question that places them, instead of Him, in an inescapable dilemma.

Was the baptism of John a purely human affair which he carried out by his own authority, or was it by the will of God?

It is remarkable that Jesus offers only two possible options: divine or human.

After the apostles were arrested in Acts 5 for teaching/healing, the Sanhedrin (council) met to discuss a plan.

An angel had freed them from prison in the middle of the night. The Jewish leadership now knows they are up against strong opposition. What should they do?

There was a wise man among them named Gamaliel. He was confident and savvy. His counsel included the same two options Jesus outlined in Luke 20.

Acts 5:38 And now I say to you, keep away from these men and let them alone; for if this plan or this work is of men, it will come to nothing;
Acts 5:39 but if it is of God, you cannot overthrow it — lest you even be found to fight against God.

Christ makes no appeal to the chief sources of authority in Judaism – He doesn’t claim a famous rabbi, He doesn’t point to the Torah, He doesn’t speak of the temple. He says: John’s ministry was either from God or from his own imagination.

John’s baptism: From heaven? or From men?

Why did Jesus bring up John the Baptist? Because John’s baptism and preaching were specifically concerned with the coming of the Redeemer. John’s ministry was strictly to prepare for and herald the entry of Jesus the Messiah.

WHAT WAS THE DRIVING FORCE BEHIND JOHN THE BAPTIST?

John the Baptist had a notable influence on the Jews and, to a certain extent, the Roman empire in the 1st century. So much so, that when Paul visited Ephesus in the mid-first century, he discovered that John’s reputation exceeded Jesus’ reputation there.

Acts 19:1 And it happened, while Apollos was at Corinth, that Paul, having passed through the upper regions, came to Ephesus. And finding some disciples
Acts 19:2 he said to them, “Did you receive the Holy Spirit when you believed?” So they said to him, “We have not so much as heard whether there is a Holy Spirit.”
Acts 19:3 And he said to them, “Into what then were you baptized?” So they said, “Into John's baptism.”
Acts 19:4 Then Paul said, “John indeed baptized with a baptism of repentance, saying to the people that they should believe on Him who would come after him, that is, on Christ Jesus.”
Acts 19:5 When they heard this, they were baptized in the name of the Lord Jesus.

Josephus’ report on John surpasses his similar report on Jesus in both length and detail.

Jesus’ actions and words are connected to John because Jesus was baptized by John. At Christ’s baptism, a voice from heaven claimed Jesus as God’s beloved Son.

Why did Jesus have the authority/right to do what He did? Because of what the voice from heaven said to Him at His baptism.

Luke 3:22 And the Holy Spirit descended in bodily form like a dove upon Him, and a voice came from heaven which said, “You are My beloved Son; in You I am well pleased.”

The Savior asks the question in connection with John, not to evade the question of the Jewish leaders, but because the right answer to His question was also the correct answer to theirs.

John’s ministry was from heaven. And Jesus’ authority was from the same place!

When faced with the ultimate question about Jesus, even the Sanhedrin, the most authoritative body in Judaism, cannot avoid a decision of faith.

Luke 20:5 And they reasoned among themselves, saying, “If we say, ‘From heaven,’ He will say, ‘Why then did you not believe him?’
Luke 20:6 But if we say, ‘From men,’ all the people will stone us, for they are persuaded that John was a prophet.”

The Jewish authority figures were not dull. Even though they were spiritually blind, they were quite intelligent. They realized that they would have to be extremely careful about their answer to Jesus’ question. They must measure their words.

They huddle together to reason it out. (consider)

Isaiah 43:18 Do not remember the former things, nor consider the things of old.

The Sanhedrin would do well not to judge Jesus by old paradigms, but by John’s fresh prophetic activity. But they are simply unable to do so. They had rejected John the Baptist outright already…

In vv. 5-6 the situation shifts from a decision about Jesus to managing the consequences of such a decision.

The priests, scribes and elders do not huddle over the question, “Was John a prophet of God?” but “How shall we handle this in front of these people?”

“from heaven” – we will be challenged publicly

“from men” – we will not physically survive

This answer is dangerous for them since the crowds viewed John as a true prophet, and to reject him is to reject God who sent him.

By rejecting God, the charge would be blasphemy, and the penalty would be death by stoning.

The Venerable Bede aptly captures the Sanhedrin’s dilemma: “they fear the possibility of being stoned to death by the crowd, but they fear a true confession even more.”

Too proud to admit that they had made a mistake, and too people-pleasing to take a stand for what they believed, there was nothing these men could say.

Luke 20:7 So they answered that they did not know where it was from.

The clergy in Israel always pretended to the masses that that were nearly omniscient in religious matters. They despised ordinary people as ignorant and lawless.

Even worse, now they were compelled to admit to Christ, in front of the regular worshipers, that they did not possess enough insight to answer His question.

“We don’t know where it was from,” they answer.

Technically, that is not true. They are unwilling to know.

Did you know that God is not fooled when we say things that are technically true, but our hearts don’t really believe them?

Luke 20:8 And Jesus said to them, “Neither will I tell you by what authority I do these things.”

Because they refused to give an honest answer to Jesus’ direct question, our Lord declined to reply to their initial question.

Jesus refused to give more light to those who refused to accept the light they already had.

His answer for them, no matter how complete, is unlikely to satisfy them. It will only arouse further suspicion on their part. He was under no obligation whatsoever to answer a question designed to harm Him.

In effect, Jesus says to them, “If you do not recognize authority when you see it, then no amount of arguing will convince you.”

To those unwilling to commit themselves, He commits not Himself.

If only their faith was as small as a mustard seed, He would respond, “Truly I tell you.” But without faith, He responds, “Neither will I tell you.”

He spoke with the invincible authority of Almighty God. We may question Jesus as much as we like, asking Him all the questions that trouble us in a fallen world – the questions we sometimes think that even God is hard pressed to answer – but we will never catch Jesus at a disadvantage.

The questions that really cannot be answered are the ones that Jesus has for us, if we refuse to believe that He is the Son of God, the King of Heaven, and the Savior of the world. 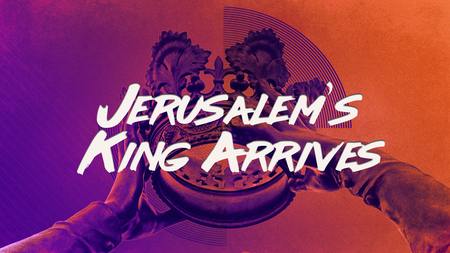 BY WHAT AUTHORITY ARE YOU DOING THESE THINGS?

MY HOUSE IS A HOUSE OF PRAYER

Trevor Davis
Senior Pastor
May 15, 2022
View all Sermons in Series