As early as Luke 2, in Jesus’ infancy, Simeon had prophesied that Jesus would be the cause of sharp division within Israel. This prediction began to take shape during His earthly ministry, and Christ Himself heralded the Day of the Son of Man, the end of time, as the final division.

Luke 2:34 Then Simeon blessed them, and said to Mary His mother, “Behold, this Child is destined for the fall and rising of many in Israel, and for a sign which will be spoken against
Luke 2:35 (yes, a sword will pierce through your own soul also), that the thoughts of many hearts may be revealed.”

In the latter part of Luke 12, Jesus taught us that following Him requires making decisions that divide the most intimate and the most important human relationships.

Luke 12:51 Do you suppose that I came to give peace on earth? I tell you, not at all, but rather division.
Luke 12:52 For from now on five in one house will be divided: three against two, and two against three.
Luke 12:53 Father will be divided against son and son against father, mother against daughter and daughter against mother, mother-in-law against her daughter-in-law and daughter-in-law against her mother-in-law.

In our text today, He revisits the same idea. But this time He points to the end of time rather than to His earthly ministry.

Luke 17:34 “I tell you, in that night there will be two men in one bed: the one will be taken and the other will be left.

When the Son of Man returns, He will make an eternal separation. Some will be saved, while others are lost forever.

God will cut right down the center of the human race and make a final division between the redeemed and the damned.

This eternal separation – this great divorce – will divide even the closest relationships. People who share almost the exact same situation in life will find themselves on opposite sides of eternity.

“two men” = “two people” – Since the Bible nowhere condones homosexual practice, this is not a reference to two males sleeping in the same bed as intimate partners. (in original language, the pronoun for people is masculine/plural)

The common family dwelling place in the A.N.E. would have only one large bedroom. All who spent their nights under the same roof slept the same room, including the father and his sons.

So, you either have a husband/wife separation or a separation of father/son – both are asleep in the same space.

God’s judgment comes and takes away one by grace but leaves the other in judgment.

The one “left” is abandoned to judgment.

The faith of the household is no guarantee against the justice of the Lord. God has no grandchildren, only children.

Luke 17:35 Two women will be grinding together: the one will be taken and the other left.

These two women are doing the same thing in the same place at the same time.

Even though they labor in harmony together, one is stolen away while the other remains.

If they ladies were purchasing grain in the market and grinding it there before taking it home for the family’s bread, then the men in the field were hard at work, laboring for the same master.

Both were exerting the same effort. Both were sweating under the sun in the heat of the day. Both would be paid the same wage.

And yet, God’s judgment visited them. One disappeared into his rest. The other continued in the field, his work not complete.

Outwardly, each member of each pair looks the same.

But, the Son of Man knows the heart and soul of each individual, and He divides accordingly.

The end of the world could come at any moment. How suddenly and unexpectedly Jesus will come again, and how disastrous His coming will be for anyone who is not prepared!

If we trust in Jesus Christ and obey His gospel demands, there is no need to be afraid. But if we do not believe in Jesus’ work on the cross on our behalf, we are not ready for the day of the Son of Man.

Will we live the same way if we truly understand this truth? Can we possibly go about our business as usual?

We must be wise like Noah, who found safety in the ark, not foolish like Lot’s wife, who looked back at the worldliness she loved and was lost forever.

Once we belong to Jesus, we start praying for those we know who need to believe in Jesus. This means loving them for Jesus’ sake and talking straight with them about the gospel.

Consider what will happen on the day of judgment to your husband or wife, to the people who work at your office, to the friend who sits next to you in class, or to the neighbor who lives on your street.

Will they lost when the time comes, or will they find safety in Jesus Christ?

The disciples were deeply troubled when Jesus said all this, and rightly so. They were terrified at the thought of being anywhere near the place of judgment where some are taken and some are left.

Luke 17:37 And they answered and said to Him, “Where, Lord?” So He said to them, “Wherever the body is, there the eagles will be gathered together.”

YOU CAN WAIT TOO LATE

The disciples ask Jesus another question. They heard the Pharisees ask the question of “when” and heard Jesus’ mild rebuke when He answered it.

They know not to ask “when” again, so they opt for “where.”

The spouse who is left behind, the customer at the market, and the worker in the field – where will their judgment take place?

If the disciples weren’t satisfied with the answer Jesus gave to the Pharisees when they asked him when the kingdom would come, then they surely were not prepared for His reply to their question!

“Wherever the body is, there the eagles will be gathered together.”

That is a cryptic-sounding proverb.

But Jesus’ answer was meant to help the disciples, not confuse them.

The most obvious meaning behind this proverb is to understand the instincts of birds of prey.

Eagles, like other predators, are attracted to dead flesh. Eagles are also birds of omen, just as the events preceding the return of the Son of Man are also omens – not precise timetables, but certain reminders of what is inevitable and what is ultimate.

The place where people are spiritually dead is the place where the forces of judgment will gather, much the same way that eagles and vultures circle around a carcass.

Birds of prey feed off the dead, and by the time they have gathered, there is nothing anyone can do for the deceased.

“As birds of prey scent out the carrion, so wherever is found a mass of incurable moral and spiritual corruption there will be seen alighting the ministers of divine judgment.”

Jesus used this proverb as a grim warning. He forces us to ask: Am I still dead in my sins, or have I found new life in Jesus Christ?

illus: In one of his famous evangelistic sermons, Dr. Donald Grey Barnhouse told the story of a man he went to visit in a Philadelphia hospital. Dr. Barnhouse heard the man was dying, and since he knew the man was not a Christian, he wanted one last chance to give him the gospel. Even on his deathbed, the man showed so little concern for his eternal destiny that Dr. Barnhouse decided the situation called for drastic measures. He asked the man if he could stay in his room through the night. When the man asked why, the pastor pulled up a chair and said, “Because I’ve never seen a man die without Christ.” Suddenly the man realized that he was not nearly as ready to die as he thought he was, and by the time their conversation was over, he prayed to receive Christ.

Whoever is wise will believe in Christ as King and Savior and Lord. But do not presume someone will love your soul like Dr. Barnhouse. Likely, there will be no evangelist present at the moment of your death.

The Day of Christ’s Return will be the day when good and evil, converted and unconverted will at last be divided into two distinct groups.

The visible church will no longer be a mixed group. The wheat and the tares will no longer grow side by side; the good fish and the bad fish will at length be sorted into two groups.

The angels will come and collect the godly, that they may be rewarded, and will leave the wicked behind to be judged.

“Converted or unconverted?” will be the only question.

What is Jesus signaling by teaching about the end of the world in the middle of His earthly ministry rather than at the end?

He clearly wants us to view the teaching of last things as vitally important. It is not an appendage to the gospel message.

Jesus as the centerpiece of the last days of planet earth is not the icing, it is part of the cake itself.

The future victory of the Son of Man over sin, over death, and over Satan is essential to the faith and daily activities of Christ’s disciples anywhere in the world at any time.

They are not relegated to being observers or spectators, helplessly longing for the Not Yet. Instead, believers are given a vision of the One who journeys to Jerusalem to “suffer many things and be rejected by this generation” (v.25).

Just like the society in which they live, they can easily lapse into neglect and fail in being watchful and awake (vv.26-30). They must beware of turning back, even when victory seems assured (vv.31-34).

They must be aware of allowing intimate human fellowship and belonging to social groups to replace their allegiance to Jesus and the gospel (vv.33-36).

When Jesus includes the teaching of last things in His regular, earthly ministry it is a robust reminder that the kingdom of God is not some far away idea that we can only glimpse on the distant horizon.

Instead, it is already present in the costly lifestyle of following Jesus along the narrow road that leads to life.

Nor is the kingdom of God a revolutionary political program, but a kingdom in which God’s will is done on earth as it is in heaven.

Nor is the kingdom a utopian dream of a secularized religion in which the “good life” of financial security, social programs, and retirement funds serve to blind believers to the sudden, inescapable, and final return of the Son of Man.

Whoever recognizes the face of the Crucified One will recognize the same face in the reigning Son of Man; and whoever trusts in the ultimate victory of the Son of Man will receive power through the Holy Spirit to follow Jesus on the road to Jerusalem. 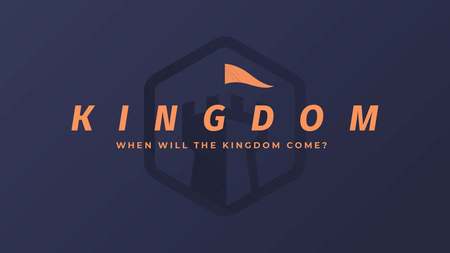 When Will The Kingdom Come?
Current Sermon

THE KINGDOM OF GOD IS WITHIN YOU