There was a certain man in Caesarea called Cornelius, a centurion of what was called the Italian Regiment,

a devout man and one who feared God with all his household, who gave alms generously to the people, and prayed to God always.

About the ninth hour of the day he saw clearly in a vision an angel of God coming in and saying to him, “Cornelius!”

And when he observed him, he was afraid, and said, “What is it, lord?”

So he said to him, “Your prayers and your alms have come up for a memorial before God.

Now send men to Joppa, and send for Simon whose surname is Peter.

The next day, as they went on their journey and drew near the city, Peter went up on the housetop to pray, about the sixth hour.

Then he became very hungry and wanted to eat; but while they made ready, he fell into a trance

and saw heaven opened and an object like a great sheet bound at the four corners, descending to him and let down to the earth.

In it were all kinds of four-footed animals of the earth, wild beasts, creeping things, and birds of the air.

But Peter said, “Not so, Lord! For I have never eaten anything common or unclean.”

Now while Peter wondered within himself what this vision which he had seen meant, behold, the men who had been sent from Cornelius had made inquiry for Simon’s house, and stood before the gate.

And they called and asked whether Simon, whose surname was Peter, was lodging there.

While Peter thought about the vision, the Spirit said to him, “Behold, three men are seeking you.

And the following day they entered Caesarea. Now Cornelius was waiting for them, and had called together his relatives and close friends.

Then he said to them, “You know how unlawful it is for a Jewish man to keep company with or go to one of another nation. But God has shown me that I should not call any man common or unclean.

Therefore I came without objection as soon as I was sent for. I ask, then, for what reason have you sent for me?”

The word which God sent to the children of Israel, preaching peace through Jesus Christ— He is Lord of all—

that word you know, which was proclaimed throughout all Judea, and began from Galilee after the baptism which John preached:

how God anointed Jesus of Nazareth with the Holy Spirit and with power, who went about doing good and healing all who were oppressed by the devil, for God was with Him.

And we are witnesses of all things which He did both in the land of the Jews and in Jerusalem, whom they killed by hanging on a tree.

Him God raised up on the third day, and showed Him openly,

not to all the people, but to witnesses chosen before by God, even to us who ate and drank with Him after He arose from the dead.

And He commanded us to preach to the people, and to testify that it is He who was ordained by God to be Judge of the living and the dead.

For the Father judges no one, but has committed all judgment to the Son,

So likewise you, unless you utter by the tongue words easy to understand, how will it be known what is spoken? For you will be speaking into the air.

“When the Son of Man comes in His glory, and all the holy angels with Him, then He will sit on the throne of His glory.

All the nations will be gathered before Him, and He will separate them one from another, as a shepherd divides his sheep from the goats.

And He will set the sheep on His right hand, but the goats on the left.

Then the King will say to those on His right hand, ‘Come, you blessed of My Father, inherit the kingdom prepared for you from the foundation of the world:

“Then the righteous will answer Him, saying, ‘Lord, when did we see You hungry and feed You, or thirsty and give You drink?

When did we see You a stranger and take You in, or naked and clothe You?

Or when did we see You sick, or in prison, and come to You?’

And the King will answer and say to them, ‘Assuredly, I say to you, inasmuch as you did it to one of the least of these My brethren, you did it to Me.’

“Then He will also say to those on the left hand, ‘Depart from Me, you cursed, into the everlasting fire prepared for the devil and his angels:

Charles Spurgeon- " The Jews that accused Him, the Romans that executed Him, the ancient Gentiles that persecuted his Apostles, the scoffers of modern times who ridicule His claims, all kings and patriarchs before the flood, with all the nations that have come and gone since then , and all that shall come and shall yet be, must all without exception put in a personal appearance before the  bar of the Nazarene, who is also the Son of God."

To Him all the prophets witness that, through His name, whoever believes in Him will receive remission of sins.”

While Peter was still speaking these words, the Holy Spirit fell upon all those who heard the word.

And those of the circumcision who believed were astonished, as many as came with Peter, because the gift of the Holy Spirit had been poured out on the Gentiles also.

For they heard them speak with tongues and magnify God.

And he told us how he had seen an angel standing in his house, who said to him, ‘Send men to Joppa, and call for Simon whose surname is Peter,

who will tell you words by which you and all your household will be saved.’

When they heard these things they became silent; and they glorified God, saying, “Then God has also granted to the Gentiles repentance to life.” 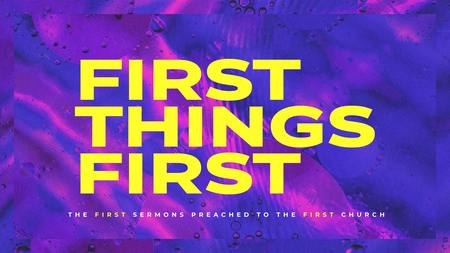 After the lame man was healed
First Things First
Acts 3:11-26

by the Apostle Peter on the Day of Pentecost
First Things First
Acts 2:14-38