The Offense of the Gospel Message
I CAME TO SEND FIRE ON THE EARTH
Luke 12:49-53
Intro: We return to our study of Luke, picking up the text in a very provocative section.

Early in Luke, Zacharias prophesies that the baby Jesus will eventually “guide our feet in the way of peace” (1:79). Outside Bethlehem, the angels announce praise, declaring, “Glory to God in the highest, and on earth peace, goodwill toward men” (2:14). Later in His ministry, Jesus tells one of God’s wounded daughters, “Your faith has saved you. Go in peace” (7:50). One chapter later, he tells another wounded daughter who had been bleeding for twelve years, “Daughter, be of good cheer; your faith has made you well. Go in peace” (8:48). He taught His disciples to do the same when they were on their traveling missions, “But whatever house you enter, first say, ‘Peace to this house’” (10:5). We have ample evidence that one of the recurring themes surrounding Jesus was “peace.”

Still surrounded by a great multitude, consisted of enraged leaders, excited and curious crowds of people from among the ordinary masses and His little band of disciples, the Savior utters some astonishing words.

Luke 12:49 “I came to send fire on the earth, and how I wish it were already kindled!

Fire has a twofold effect – it destroys what is combustible and it purifies and refines anything that is non-flammable.

WHAT KIND OF FIRE?

In stating that He has come to bring fire, Jesus has in mind the refiner’s fir that melts away the dross and presents the pure burnished metal.

Fire, here, is not merely the symbol for holiness, or of faith, or of dissension, or of judgment.

It more generally refers to the spiritual power exercised by the Lord through His word and His Spirit to the undoing of those who reject Him and to the refining of those who believe in Him.

This is traditional OT language. God uses the word “fire” to indicate His intention of mounting a painful purging and purifying of His people.

Jeremiah 23:29 “Is not My word like a fire?” says the Lord, “And like a hammer that breaks the rock in pieces?”

More precisely, the image is of Jesus awaiting the time when the Father will kindle the fire with which Christ will set the earth ablaze.

2 Peter 3:10 But the day of the Lord will come as a thief in the night, in which the heavens will pass away with a great noise, and the elements will melt with fervent heat; both the earth and the works that are in it will be burned up.
2 Peter 3:11 Therefore, since all these things will be dissolved, what manner of persons ought you to be in holy conduct and godliness,
2 Peter 3:12 looking for and hastening the coming of the day of God, because of which the heavens will be dissolved, being on fire, and the elements will melt with fervent heat?
2 Peter 3:13 Nevertheless we, according to His promise, look for new heavens and a new earth in which righteousness dwells.

Malachi 4:1 “For behold, the day is coming, burning like an oven, and all the proud, yes, all who do wickedly will be stubble. And the day which is coming shall burn them up,” says the Lord of hosts, “that will leave them neither root nor branch.”

What Jesus anticipates here is no mere fate. It is no accident. It is His destiny which the Father has set for Him to fulfill.

Luke 3:16 John answered, saying to all, “I indeed baptize you with water; but One mightier than I is coming, whose sandal strap I am not worthy to loose. He will baptize you with the Holy Spirit and fire.”

The following verses make it clear that Jesus does not only stand over the world as a fiery judge, but that He also must make His way through the end-time distress for which it is His task to set ablaze the refiner’s fire.

Christ Jesus awaits with eager expectation the fulfillment of God’s purposes. He looks forward to this fire being kindled at the cross, which is the focus of all His activities.

The One who is to spread a fire upon the earth is Himself destined to be overwhelmed by disaster: indeed, He will be “immersed” in disaster.

Luke 12:50 But I have a baptism to be baptized with, and how distressed I am till it is accomplished!

Jesus’ commitment to God’s will was total.

Before this fire can be sent upon the earth in full measure – to purify and to destroy – Jesus must first be plunged into the flood of pain and suffering while He is finishing mankind’s redemption.

Jesus is saying that God’s plan is for salvation that involves judgment, but a judgment that the Messiah will bear for others, not one He will inflict on others.

Mark 10:37 They said to Him, “Grant us that we may sit, one on Your right hand and the other on Your left, in Your glory.”
Mark 10:38 But Jesus said to them, “You do not know what you ask. Are you able to drink the cup that I drink, and be baptized with the baptism that I am baptized with?”

It is in no way attractive, but Jesus longs for it to be completed. He will be baptized in judgment for sinners.

This baptism is a reference to Christ’s passion week where He will be tried, tortured, mocked and crucified in agony. He will go the entire distance. He will not seek a lesser sentence.

He possesses a holy eagerness to go all the way to the cross to please His Father.

Luke 9:51 Now it came to pass, when the time had come for Him to be received up, that He steadfastly set His face to go to Jerusalem

Until His passion and the subsequent sending of the Spirit, Jesus is constrained and pushing against all restraints.

“how distressed I am till it is accomplished” – “what constraint I’m under until the ordeal is over!” (NEB) or “How I am totally governed by this until it is finally accomplished!”

“The prospect of His sufferings was a perpetual Gethsemane.” The shadow of the cross hung over Him. He knew it was inevitable.

Even though He accepted that it was inescapable, nothing could make His crucifixion appealing.

Jesus died an agonizing death with a willing and ready mind. Both in life and in death, He was carrying out the eternal counsel whereby God was to be glorified and sinners were to be saved.

He not only feels, deeply, the pain He himself will face, but also the struggles and persecution His followers will experience.

His harsh tone continues with a paradoxical denial.

Luke 12:51 Do you suppose that I came to give peace on earth? I tell you, not at all, but rather division.

WHAT DID HE SAY?

Did He just say that the Prince of Peace did not come to bring peace? Did He just promise to be a divider instead of a uniter?

The Lord Jesus does indeed bring peace to those who trust in Him. He will even bring peace to its fullest extent in the earth, but not until His glorious Return. The new earth will be characterized by the peace of God.

But that truth is not in view here. Until the Return of Christ, the strife between good and evil will continue without pause.

Luke 2:34 Then Simeon blessed them, and said to Mary His mother, “Behold, this Child is destined for the fall and rising of many in Israel, and for a sign which will be spoken against
Luke 2:35 (yes, a sword will pierce through your own soul also), that the thoughts of many hearts may be revealed.”

There is a sense in which Jesus came to bring peace. But some things are more important than peace, and sometimes Christ’s message and the way it is received divides.

Division may seem discordant and even offensive to our inclusive age, but it is a fundamental property of God’s relation to the world.

In Genesis 1: God divided the light from the darkness, the waters from the firmament, and the day from the night. This process, when pushed to its final stage, results in the greatest likeness to God – humanity created in “the image of God.”

In this text, Christ instructs us about the judgment coming in the Last Days. There will be a time of great distress in the earth before the hope of God’s worldwide peace is possible.

Jesus Himself becomes the point of division that will set people against one another, in conflict and not in peace.

This conflict will penetrate the very heart of family life, with close relatives set firmly against one another.

These verses echo a prophecy from Micah about the coming distress of the Last Days.

He laments that the godly and upright have vanished from the earth. Those in power only care about themselves and their money. There is no justice in the courts. Everyone is suspicious of their friends.

For Jesus, the divisions are generational.

There will not simply be discord between siblings. That is common in most families. But when there is discord and estrangement between parents and children, something has notably escalated.

Jesus is the most polarizing figure in history

All of humanity is divided over Him.

According to Luke, the essential function of the Messiah is not to heal divisions but to intensify them.

For many He will be a stumbling-block. Some will choose His side. Others will choose against Him. And those who choose Christ will be despised and mistreated by other in the most intimate circles of fellowship.

This text demands that we make a clear-cut commitment to Jesus no matter who opposes it or how much it costs.

In John’s Gospel, Jesus says that He is the whole world’s “crisis.”

In this context, “crisis” (judgment) does not mean “emergency.” Instead, it means that moment of truth or that moment of decision every individual must make about life.

What will you do with Jesus, who is called “Christ?”

To be placed in the situation of decision is critical, because turning toward one person or toward one goal or toward one value means turning away from another.

According to these verses, God is so acting toward the world in Jesus of Nazareth that a crisis is created, a moment of truth.

Jesus is the ultimate reality. All human history is speeding toward impact with Him.

One day every knee will bow, and every tongue will confess that He is Lord.

“Peace” in the sense of the “status quo” is now disrupted. Historically this has been proven true, and it will be finally true on that Last Day.

During this time, His disciples must be prepared for a break in their family relationships if other do not concur with their decision to follow Christ.

Whoever hears the call of Christ and allows the call to take precedence over the otherwise ultimate claims of marriage and family, even your own life, is graciously received into the fellowship of Jesus and His mission, which is the kingdom of God.

A decision to allow the kingdom’s ultimate authority in your life will divide you from the world. But it will not alienate you completely form the world.

Fellowship with Jesus endows us with freedom, strength, and love to participate in the world redemptively, to serve the world, and even to suffer in the cause of Christ for the world. 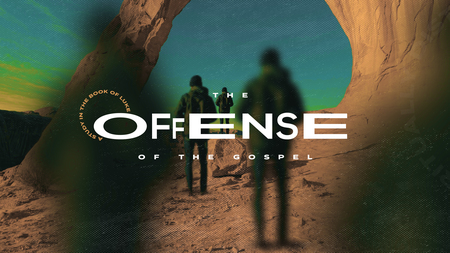 The Offense of the gospel message

How long do you have to live?
The Offense of the gospel message
Luke 13:6-9

Unless You Repent, You Will All Likewise Perish

The Offense of the gospel message
Luke 13:1-5

I Came to Send Fire on the Earth