Growing in the Gifts of the Holy Spirit
PURSUE LOVE AND DESIRE SPIRITUAL GIFTS
1 Corinthians 14:1-5
Intro: Paul has already addressed a variety of spiritual gifts. He has also insisted upon how the body of Christ must be unified. He has shown that love is paramount; it stands above all else. Now he concentrates on two of the gifts, tongues and prophecy. How much he wrote about them in this passage shows how important this subject was to the Corinthian believers. It is fairly easy to deduce from these verses that there were some members of the Corinthian church who were abusing the gift of tongues by elevating it above the rest. They believe their ability to speak in a heavenly language that surpasses human understanding is the ultimate sign of their spiritual power and maturity. Also, it is clear there was virtually no courtesy extended to the other believers who did not possess this gift. Not only were they being drowned out by the cacophony of tongues in their meetings, but nothing was being interpreted. No one knew what was being communicated, even if some of it came from the Holy Spirit. Chaos reigned in the gatherings of the Corinthian church. Imagine attending a church meeting where the dominant characteristic was incoherent speech. Those who did not possess the gift of tongues were sidelined until they received that gift, and until that happened, they were out of luck. There would be no place in the ministry for such limited believers. Now imagine all the nonsense being blamed on the Spirit of God! This was the disaster Paul was now assigned to correct and overhaul. What a tricky assignment this was! Paul had to rein in the abuses of a legitimate gift of the Holy Spirit. Tongues can be a mark of spiritual fervor. Every gift of God is good and should be used. But at the same time, Paul must curb the exaggerated interest in this one gift above all the rest. How could he do that without alienating both groups? The ones who did not speak in tongues were ready for any ministry in their church except that one. Those who favored tongues and were abusing it were not inclined to give it up or change their practices. Paul’s solution? Insist that there was a more valuable gift to be employed when the church gathered. That gift was prophecy. The prophetic person speaks inspired intelligible messages from the Lord directly to the congregation. Prophecy is reporting in plain language what the Holy Spirit brings to mind. Paul shares with the Corinthians a vision for community worship as the setting in which God will speak and act powerfully through spontaneous supernatural revelations. How then can he seek to create order in the church’s worship without quenching the Spirit?

WHAT MUST BE OUR AIM?

1 Cor 14:1 Pursue love, and desire spiritual gifts, but especially that you may prophesy.

These opening words summarize Paul’s position. As he stressed throughout ch.13, the most important thing is the pursuit of agapē love.

Phil 3:14 I press toward the goal for the prize of the upward call of God in Christ Jesus.

1 Tim 6:11 But you, O man of God, flee these things and pursue righteousness, godliness, faith, love, patience, gentleness.
1 Tim 6:12 Fight the good fight of faith, lay hold on eternal life, to which you were also called and have confessed the good confession in the presence of many witnesses.

To clarify: we are not learning to pursue spiritual gifts. It is not the gifts that we run after. Love must be our aim. Love must be our pursuit. The gifts are tools that help us as we walk the pathway of love together.

John 13:35 By this all will know that you are My disciples, if you have love for one another.

Prophecy is different from preaching. Prophecy is not the delivery of a carefully prepared sermon.

Prophecy happens in the moment when the Spirit speaks to the mind of the prophetic person.

WHO IS THE TARGET OF THE GIFT OF TONGUES?

1 Cor 14:2 For he who speaks in a tongue does not speak to men but to God, for no one understands him; however, in the spirit he speaks mysteries.

Anyone exercising the gift of tongues is engaged in private communion with God.

He prays under the inspiration of the Holy Spirit, to God. In some mysterious way, this sort of prayer spiritually helps the person.

Paul himself sings and prays in tongues more than all of the Corinthians (v.18), and he wants all who possess this gift to enjoy it (v.5).

Why are tongues inferior to prophecy? The answer is intelligibility. “No one understands him.”

illus: 1st mission trip to Brazil we visited a large Baptist church for Sunday morning service. 1,000 people in the room – whole service was in Portuguese. Except for the music (we could make out the modern songs even in another language), nothing else made any sense. Not possible to pay attention without hearing the language of your heart. Every moment dragged along because there was no understanding. There was hardly any benefit to us.

This note alone helps us to clearly distinguish the gift of tongues from the “tongues of fire” that happened on the day of Pentecost in Acts ch.2 where everyone understood what was being communicated.

Acts 2:3 Then there appeared to them divided tongues, as of fire, and one sat upon each of them.
Acts 2:4 And they were all filled with the Holy Spirit and began to speak with other tongues, as the Spirit gave them utterance.

Acts 2:8 And how is it that we hear, each in our own language in which we were born?
Acts 2:9 Parthians and Medes and Elamites, those dwelling in Mesopotamia, Judea and Cappadocia, Pontus and Asia,
Acts 2:10 Phrygia and Pamphylia, Egypt and the parts of Libya adjoining Cyrene, visitors from Rome, both Jews and proselytes,
Acts 2:11 Cretans and Arabs — we hear them speaking in our own tongues the wonderful works of God.

“in his spirit he speaks mysteries” = these mysteries are secret matters which people could never know themselves, but the idea is that God has now revealed them.

Unless there is someone present who possesses the gift of interpretation, what is spoken in tongues is quite unknowable to mankind.

WHO BENEFITS FROM THE GIFTS OF PROPHECY AND TONGUES?

1 Cor 14:3 But he who prophesies speaks edification and exhortation and comfort to men.

By contrast, the prophetic person edifies (builds up), exhorts (challenges), and comforts (consoles).

Edification in the NT primarily means “to build” or “to reinforce”

Eph 4:29 Let no corrupt word proceed out of your mouth, but what is good for necessary edification, that it may impart grace to the hearers.

1 Tim 4:13 Till I come, give attention to reading, to exhortation, to doctrine.

Comfort in the NT usually refers to “consoling” the bereaved.

John 11:15 And many of the Jews had joined the women around Martha and Mary, to comfort them concerning their brother.

When believers are hurting in their emotions, a prophetic word can be like a medicine.

Prophecy, then, is a means of building up Christian character. It encourages others by making them stronger. And it gives them comfort in their distress.

1 Cor 14:4 He who speaks in a tongue edifies himself, but he who prophesies edifies the church.

Paul does not deny that tongues have value. Indeed, they do. They are a gift from God’s Spirit.

However, speaking in tongues only builds up the speaker. It has very little, if any, corporate benefit.

What else edifies self? The answer is: all the personal, spiritual disciplines.

When we pray in private; when we read the Scriptures in solitude; when we sing God’s praises when no one else is around – these are self-building practices. Whatever we do in our time alone with God that feeds our spirits makes it a worthy quest.

That is the best time to practice the gift of tongues – to pray with our inner person.

Tongues profit the person who exercises the gift, whereas prophecy builds up the whole congregation – there is no doubt which one has the bigger love benefit – it is the one that helps the most people.

Building up the whole congregation is to be the benchmark goal of all that is done when the church gathers to worship the Lord. In ch.14, Paul emphasizes the church being edified seven different times. For Paul, everything is tested by this singular purpose.

1 Cor 14:5 I wish you all spoke with tongues, but even more that you prophesied; for he who prophesies is greater than he who speaks with tongues, unless indeed he interprets, that the church may receive edification.

Paul goes to great lengths to rescue the gift of tongues from those who would deny its value. He will not have one of God’s gifts to the church disparaged.

“I wish you all spoke with tongues” is not a reversal of Paul’s wish to dial back the use of tongues in their worship services.

Instead, it is hyperbole. An inspired writer of Scripture would never wish for anything contrary to divine principles. Paul has a shepherd’s heart. He does not want to discourage the sheep in Corinth, so he stresses balance.

Paul is concerned that God’s people will jettison a true gift of the Spirit simply because it has been abused for so long in their church.

Even so, he leaves no doubt as to which gift is better to utilize in the congregation. Prophecy is greater than tongues.

1 Cor 12:28 And God has appointed these in the church: first apostles, second prophets, third teachers, after that miracles, then gifts of healings, helps, administrations, varieties of tongues.

The word “greater” does not mean that the prophetic person is better than the tongues speaker.

It clearly means “functionally” greater rather than “essentially” greater, in the sense that the one who prophesies builds up and strengthens the church more than does the one who speaks in tongues.

PROPHECY TONGUES
speaks to members of the congregation (v.3) speaks to God (v.2)
intelligent speech for edification, exhortation & comfort (v.3) no one understands him; utters mysteries with his spirit (v.2)
edifies the church (v.4) edifies himself (v.4)

Prophecy is an intelligible phenomenon that does not require the sort of interpretation that tongues requires, but it does require sifting or weighing.

1 Cor 14:29 Let two or three prophets speak, and let the others judge.

Two important ideas emerge in light of the overarching principle that everything done must be for the building up of the church.

First, the kind of worship that transforms a church and glorifies the Lord must emphasize that everything that is communicated must be intelligible. It must be given in language that all can understand. Edifying the congregation is inseparably tied to understandable speech.

Second, strengthening, encouragement, and comfort are not possible if the meeting is structured in such a way that produces many competing voices. Even if the speech is intelligible, hearing is made difficult if order does not govern the meetings.

Corinthian worship was at times an exercise not of a body but rather of a collection of isolated individuals all displaying their gifts, like merchants at a fair.

Now a bigger picture materializes. If our church meetings are for building up all the members, how important is it to HEAR with clarity when we are gathered? What does it suggest to us about eliminating every distraction possible? 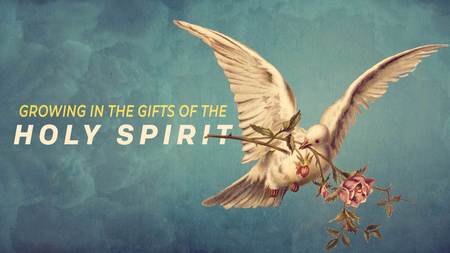 Growing in the gifts of the Holy Spirit

Let All Things Be Done Decently and In Order

God is not the Author of Confusion but of Peace

Tongues and the Edification of the Church

Growing in the gifts of the Holy Spirit
1 Corinthians 14:6-19

Growing in the gifts of the Holy Spirit
1 Corinthians 14:1-5