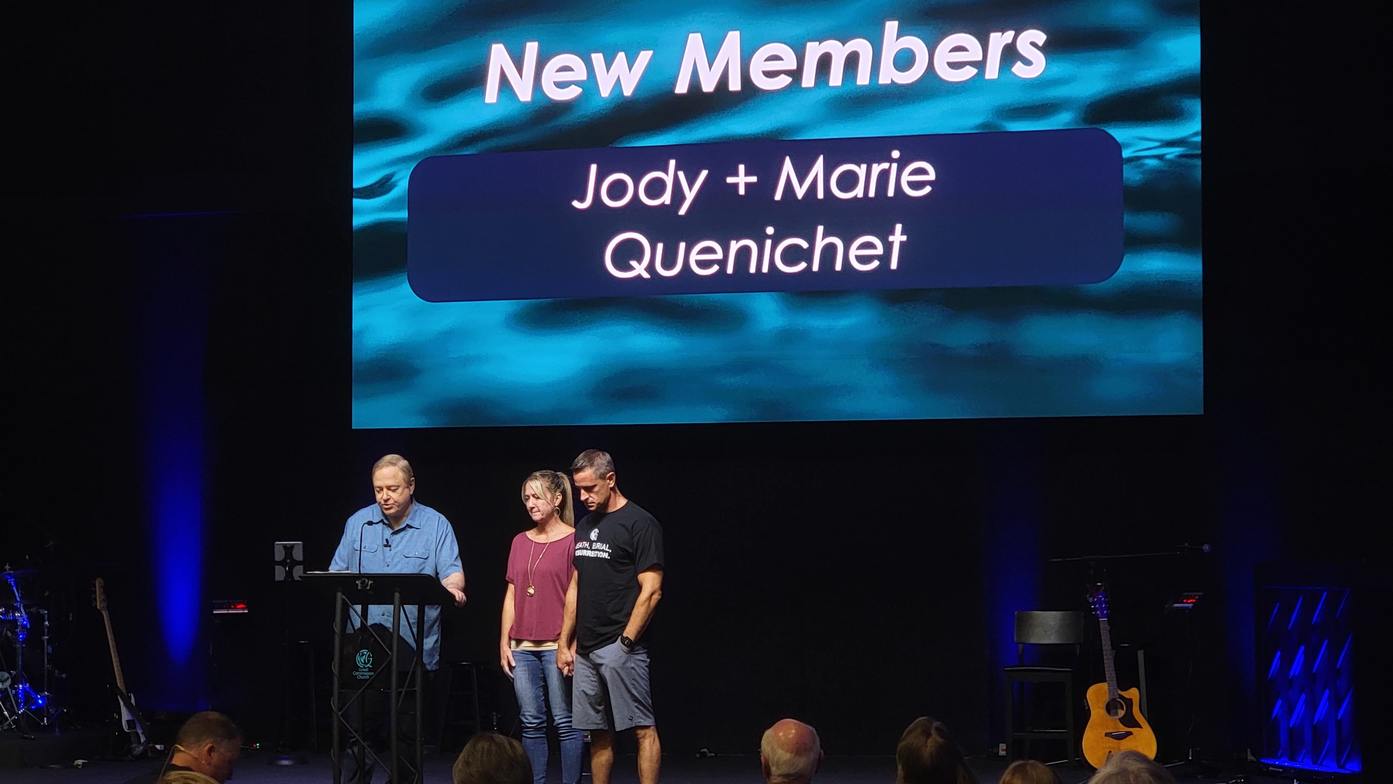 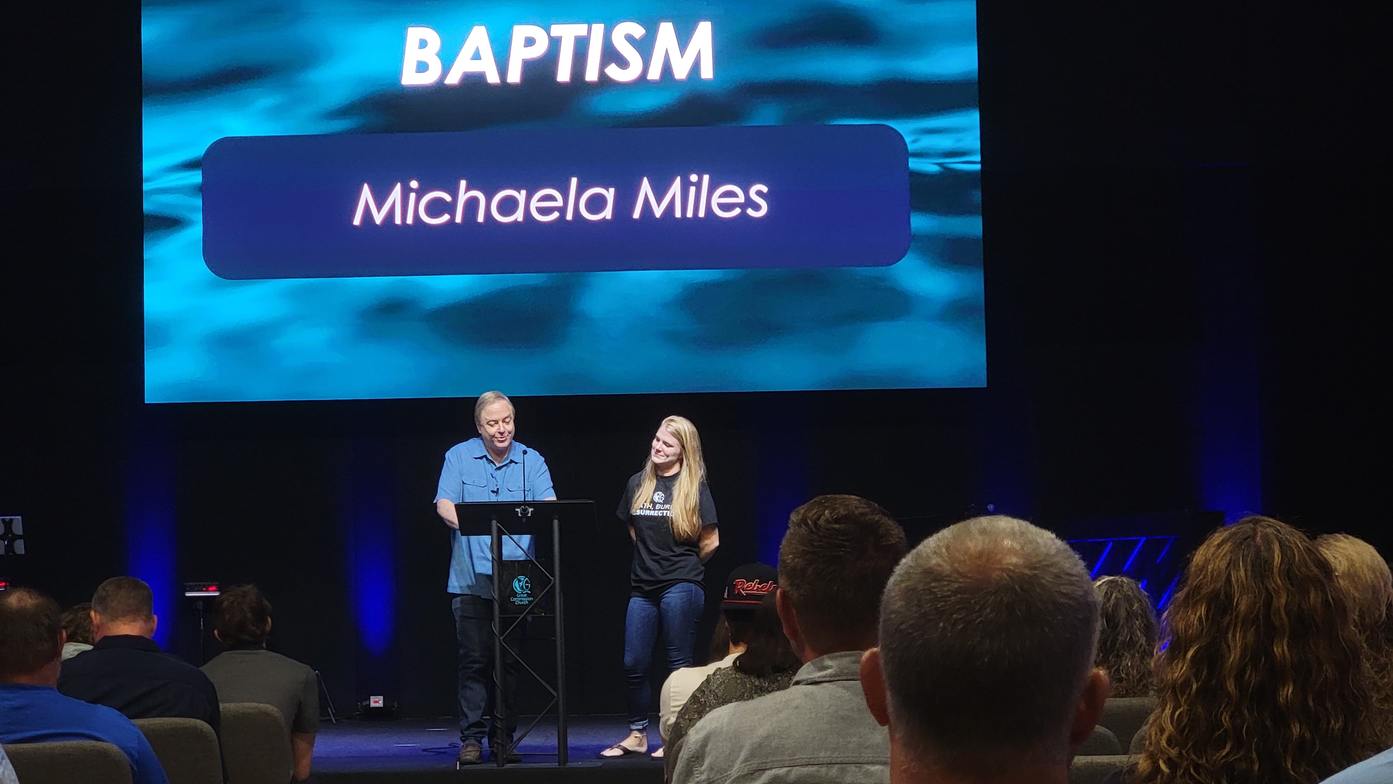 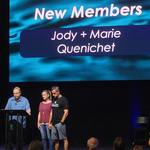 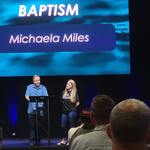 God has always been a part of my life.  Growing up, I went to church every Sunday, prayed, and read the Bible, because that was what I was supposed to do.  When I got older and left for the Navy I still thought about God, but He wasn’t a priority in my life.  There was always an excuse, “I’m too busy”, or “I’m too tired”.  If I had an excuse, then I could justify putting off God till later.             Fast-forward to the end of 2009.  I’m back in church, married and we are about to have our third child.  My husband had accepted a new job and we were in the process of planning a move across the country.  I was no longer in the Navy, but I had started pursuing my college degree.  Life was in full swing and I thought I had control, but in reality I was overwhelmed.  Sitting in service one Sunday, I realized I knew of God, but never really knew Him.  I prayed and opened up my heart to the Lord and was humbled.  God sent His Son Jesus to die for our sins, was buried and rose on the third day.  If you declare with your mouth, “Jesus is Lord,” and believe in your heart that God raised him from the dead, you will be saved (Romans 10:9).  I was baptized on February 28, 2010.             Even though I am a sinner, God has been merciful and gracious to me.  When I feel overwhelmed I give it all to God, and put my faith in Him.  My relationship with Christ is the priority in my life today.  Knowing that I will spend an eternity in Heaven with Jesus puts my fears at ease and gives my life a purpose.  God is in control now.

I was raised in a Christian home.  For much of my life, I can remember being in church if the doors were open.  We attended Sunday morning services, Sunday evening services, Wednesday evening services, and most of our friends were from our church as well.  I can’t remember a time as a child not seeing my dad in the den at 0530 reading his Bible and praying.  He had verses placed on the instrument panel of his truck and on the refrigerator.  He spoke to us about the gospel of Christ.  I attended the same Christian school from K4 through 12th grade.  I was eventually baptized at the age of twelve following a trip to camp.  However, shortly after that, I began to turn away from everything had known and heard my whole life.                 I joined the Navy as soon I could after graduating high school and did all of the things that Sailors do.  I pretty much did whatever I felt qualified as a good time.  Fast forward about twelve years…  I had gotten out of the Navy and had a growing family.  I felt the need to be the example for them that my father had been for us.  Despite all that I could do, I always felt that I fell short of the mark.  I felt the same at work.  No matter how hard I worked or what goal I achieved there was never any real satisfaction.  I always wanted more.  The same went for my marriage and my family.  I had an idea of how that should look as well.  I tried to be what I thought I should be and check all the boxes, but I couldn’t.  By this time, close to all of my spare time was spent drinking.  I was mired down by about every sin you can imagine.  I had arrived at a point where I was little more than an angry, dissatisfied, cynical drunk.                 There was an incident that took place which earned me an invite from my wife to go spend a short time outside of our home (she wasn’t specific about where, just not “here”).  I left with the promise not to drink that night.  I checked into the nearest hotel because I was not in any shape to travel too far.  That night, I lay in bed unable to sleep with an extreme headache, nausea, shaking, sweating, and cramping.  Everything kept playing in my head like a movie reel.  For the first time in a long time, I began to pray to God in a very sincere way.  I told Him that I had done everything that I possibly could and all my efforts had failed, I had nothing else.  This is what I had become.  I told Him that I had no idea what it actually looked like, but I needed a relationship with Christ.  I asked Him to make a change in me because I knew I couldn’t do it myself.  I didn’t even really know what I needed to be.  I asked Him to tell me what that was.  I don’t know how long I remained in prayer that night, but I do know that it’s what I was doing when I finally drifted off to sleep.  I also know that that was the night that Jesus Christ entered and began to work in my life and do things that I couldn’t make happen myself.                 That was nearly three years ago.  A different man walked out of that hotel than the one that walked in.  In the days following, I stayed in pretty close communication with my dad.  Through our talks and scripture that he shared with me via text, I began to understand in a way that I hadn’t before that Jesus truly died for MY sins and rose three days later.  He did that for the broken and beaten me that He knew that I was, not the man that I thought I needed to be.  I REALLY could start from zero with him like a child.  I was chosen, not rejected.  I no longer had to believe the outright lie that I was separated from Him by what I did.   That message is so simple and, though I’d heard it my whole life, it hit different this time; deeper and more personal.                 Christ gave me the strength to walk away, in faith, from what had its grip on me.  I started to seek after Him through His word and through prayer.  My eyes were opened to how He works in my life, His timing and His grace.  I praise God for the life I have today.  I am excited to see his continued work.  No matter what is happening at the moment, God is working!                 I plan to be baptized (for really real this time) as soon as I can find me some water to get into!

I grew up in a very religious household. My mother was has always been a devout Christian and tried to lead me down the same path as her. I was involved as a child in the church and was first baptized at 8 years old. At that time, I believed I was ready to dedicate myself to the Lord. However, due to unpleasant things that kept happening constantly in my life I started turning against him. I strayed away and found myself in a deep darkness that I did not know how to get out of. I became someone I did not even know anymore and it was terrifying. When my son was born he went through traumatic heart issues and I remember in that time I suddenly felt a peace with God causing me to try and work on a relationship with him. I saw that something so horrible that was happening, He was turning it around for my boy which helped me start believing in the good of Him again. Since then, it has been an on and off battle fully reconnecting with God because of my own selfishness. I could feel at times him pulling on me but I paid attention more to the wrong things in life instead of turning to Him. It was not till about 6 months ago. I was driving home by myself late at night heading to my house and I felt the urge to put on Third Day, which I hadn’t listened to since I was a lot younger. Immediately it turned to the song “Cry out to Jesus”, this huge intense wave came over me and I just started bawling, begging for Him to help me and forgive me. I did not want to feel this way about myself anymore. I could feel his presence in that moment. I have had plenty of conversations with Him wondering if I actually could be saved again or if I had done too much that it was impossible for me. God gives a lot of grace to us not because we deserve it but because he wants to. That is his gift to us.  He wants us to come seek him and have faith in him even when we have done wrong. Regardless of whatever I have done in my past, he died for my sins and can wash me clean from them. He is working on me and I know he can work on anyone else willing.    Ever since I have dedicated more into my growth with Him, speaking more about God into my children and becoming involved with others who have the same belief about God. It has been an amazing experience for me because before I always said I would try with Him but never did. I still have a lot to learn and grow with my relationship with the Lord but I am excited every day to feel closer and closer to Him. I know without Him I wouldn’t be where I am now.

Aug 7
THE PARABLE OF THE WISE AND FOOLISH VIRGINS